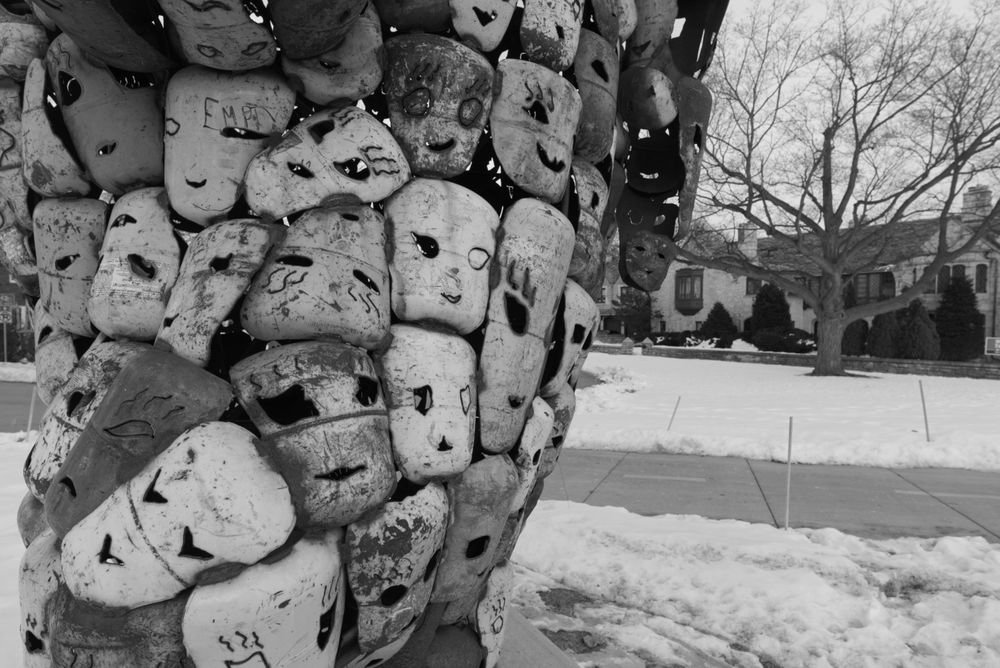 I can think of no better way to introduce myself to your virgin readership than to say that I’m the guy who chose to place The Collective, the zany-faced propane-tank amalgamation, at the west end of the College Avenue bridge.

You’re not alone if you’ve been wondering, like so many others, why I elected to install such an unpolished and seemingly remedial sculpture smack dab in the middle of a upper-class historic neighborhood? The short answer…Why not?

Public art placed on public property for the benefit of the public is the most democratic form of all art and should not be dovetailed into a narrowly-defined construct of visual acceptability for this very reason. The Collective has become a fervent focal-point for a desperately needed conversation about public art and its positive impact on the Fox Cities, and the general lack of support for it.

We are rarely afforded an opportunity to have this conversation. It doesn’t happen when pretty butterfly murals or feel-good feminine form sculptures appear, but rather when we’re challenged by artworks that arrest us in our tracks. Although not technically public, The Medusae-esque mural on the Misfits Tavern had a similar controversial effect and, like it, admirers of The Collective will admit that it is a little quirky at first glance, but you get used to it. They also say it’s the sculptures odd appearance which compels them to come back and take a closer look.

This doesn’t mean we should be dismissive of the detractors or their distressed calls for relocation of the work based on their personal interpretations. We should make sure the community has some buy-in and is at least aware of the exhibition and the intended sites we propose to place public artwork on. But, the rationale for re-tooling our Art in Public Places policy to permit a 100’ radius minority of home-owners greater influence in the decision-making process than the equally vocal majority, should be questioned. Moreover, we should never allow or condone the clandestine and illegal removal of a work, like Sleepy Time, because it makes certain individuals uncomfortable.

When I step back to witness all that this controversial sculpture has accomplished—the innumerable and mostly worthwhile discussions about the role of public art and the appropriateness of this particular location for it in the city’s right-of-way—how can I consider it anything less than a wildly successful installation?

But for all the discussion, what has gotten lost a bit in the public debate is the reason we choose this work and this location in the first place. As a friend of the family, I’ve been waiting for a unique submission to ACREofART that could do justice to remembering an incredible women, Linda Moore. Linda’s passion for found art and outsider artists drove her own artistic pursuits and this work uniquely captures that passion. Her daughters and husband think we could not have picked a more appropriate piece.

You see, Linda was an avid admirer of self-taught artists who used found objects to create atypical artworks and installations, often called “visionary” or “outsider art”, and made a point of carting her husband Brain and their kids off to the various off-the-beaten-path installations in some of the most unlikely of places. She was lucky, as are we, to live in a state which boasts some of the most extraordinary outsider art sculpture gardens in the county. We are also incredibly fortunate to host the Kohler Foundation which has single-handedly preserved many of these priceless and unique cultural heritage sites, gifting them back to their communities once it completes site restorations.

Linda visited many of these Wisconsin sites, including Prairie Moon Sculpture Garden in Fountain City, a massive concrete, stone and brick environment embellished with anything outsider artist Herman Rusch could get his hands on to festoon his fantastic dinosaurs, Hindu temple and his miniature mountain with. The Moore’s traveled to Phillips to experience Fred Smith’s Concrete Park filled with all manner of figurative and commemorative statuary decorated with shards of Rhinelander beer bottles from his tavern next door and anything else visitors dropped off to feed his passion.

And I am quite sure she reveled at the site of Dr Evermore’s Forevertron, located south of Baraboo and probably the most recognizable of the self-taught outsider sculptures in the state. It is a 300–ton kinetic assemblage of scrapped vehicle parts, and outdated industrial machinery.

To Linda, these places represented the spirit of the artist who cares little for the publics critique or personal perspectives, driven instead by an insatiable desire to create and keep on creating until they were simply incapable of doing so any longer. In the circles of outdoor public art, it’s rare to be afforded an opportunity to represent these self-taught and seldom exhibited artists, but they are no less deserving of recognition and public viewership than any other.

We know the idea of introducing sculpture all over the Fox Valley can take a bit of getting used to and we can understand why the placement of such a monumental piece in a new setting can be hard to digest. We also understand that the most effective public art is not always the prettiest nor relegated to safe, serene green spaces or secluded parks. Indeed some of the most successful works are deliberately placed to incite public interaction.

As the ACREofART grows and Appleton adjusts to an increasing presence of public art, we hope it will be brave enough… adventurous enough… to handle a little bit of weird in the mix. Let’s consider it an opportunity every couple of years, not to rant about something we personally don’t like but rather to open our minds and try to appreciate new, and yea sometimes different, modes of artistic expression in our ever-evolving city.

Alex Schultz is the Executive Director of Sculpture Valley. More information about Sculpture Valley and its projects, including ACREOfART, can be found at www.sculpturevalley.com.